Burn Queen is basically a Bandit Queen deck with a burn package of Kaleb’s Favor, Flame Blast, and Obliterate.  I originally didn’t realize that this deck gets more powerful at the highest levels of ladder, where there is more Combrei and control.  Having played a reasonable amount of this deck, here’s some data: 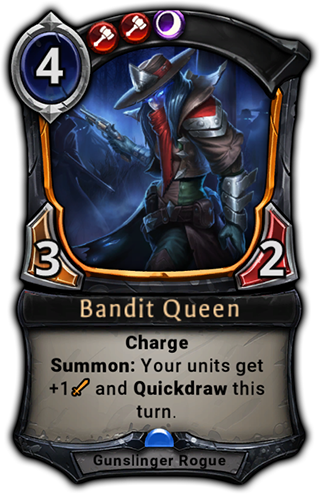 While I’ve discussed this deck before (here and here), this post will dive into the matchups and my most recent statistics on the deck.

What the deck is about

Against decks with sweepers, you want to commit enough units to the board to force the opponent to play a sweeper- but no more than that.  Any units held back can continue the attack if a sweeper is played.

Efficient removal spells like Torch, Suffocate and Rapid Shot remove blockers.  One play pattern is to throw out some 1-drops, followed by matching the opponent’s blockers 1-for-1 with removal.  This can allow the early units to get in a lot of damage and possibly put the opponent within burn range.  In the current meta, very few decks have interactivity for burn (e.g. sabotage, protect) so burn is fairly reliable at finishing off opponents.

Combrei pilots are generally unfamiliar with this matchup and do not try to put on a clock against the Burn Queen deck.  Normally, sitting behind a wall of big butts is the correct line of play against traditional Bandit Queen decks which have very little ‘reach’ (some way of dealing face damage once the opponent has a better board position).  However, this turtling strategy is no good against burn spells.

Lack of aggression means that the Burn Queen pilot can wait around for their burn spells to get more powerful and to draw cards that would make attacks profitable (e.g. Bandit Queen, Rapid Shot on big evasive units like Champion of Chaos, etc.).

Burn Queen generally has a better tempo game than Rakano Warcry/Pants, the most popular flavor of Rakano.  Burn Queen wants to race and use burst damage to kill the Rakano player.

Lack of a proactive game plan by Feln means that Burn Queen can wait for Flame Blasts to power up.

One strength of 4-faction control is that it runs many cards that are very strong against Burn Queen:

If pilot skill were equal, I suspect that 4-faction would be slightly favored.

In practice however, there are reasons as to why 4-faction loses games against Burn Queen.  As with most control decks, the lack of a proactive game plan means that Burn Queen has a lot of time to wait for Flame Blasts to get powered up.  The 3-faction influence base means that this deck loses to itself sometimes and can stumble in the early game, allowing cheap units to land a lot of damage.  Lastly, the control deck often fails to draw the right answers.  The control deck needs to draw answers for 2-3 waves of aggression from the Burn Queen deck.

I suspect that Burn Queen would be slightly unfavored against traditional Bandit Queen if pilot skill were equal.  (See my article on the nuances of Bandit Queen mirrors.)  Jito Queen runs more units than Burn Queen, giving it an advantage since units are more efficient than burn spells.  Lurking Sanguar is particularly useful in the “mirror”.

On the other hand, one advantage of Burn Queen is that it packs a lot of removal to deal with the best units in the matchup.  The optionality of removing problem units or going straight to the face is another benefit of burn spells.

Compared to 4-faction control, Icaria Blue has weaker answers and weaker threats (e.g. no Boardstall Titan).  It also has a weaker influence base.

Armory is not good against go-wide strategies like Bandit Queen.  As well, relic weapons can be destroyed with burn spells.

These decks are excellent against Burn Queen.  However, they see very little play in the current meta because they are not tier 1.

This deck is very, very good at punishing janky brews and slow decks (e.g. Clockroaches).  It also has a highly favorable matchup against Combrei (79%!!!), which is the most popular deck at the higher ranks of the ladder.  I suspect that Combrei is more popular in higher ranks since players don’t have shiftstone limitations.

The worst mainstream matchups are Bandit Queen and 4-faction control.  I had a positive win rate against these “bad” matchups, though pilot skill is a meaningful factor.  Because Burn Queen is currently a fringe deck, 4-faction control opponents have little/no experience playing against it.

Overall, this deck has an excellent winrate.  In practice, it doesn’t face any bad matchups.

I think that many players have missed how strong Bandit Queen is with a burn package.

Perception is not the same as reality.  If you collect data in a spreadsheet, then you will get a better idea about how strong decks actually are.

6 thoughts on “Burn Queen is a dominating tier 1 deck”