On the surface, the post-wipe metagame might seem reasonably diverse.  However, many tier 1 decks are simply aggro decks in different factions: rakano, aggressive combrei, and stonescar burn are proactive decks that play out mostly the same.  Slower reactive decks (“control”) are in a bad place due to how strong Stonescar burn is against slower decks.

Because the metagame is fairly fast, very janky decks like reanimator and Clockroaches curently see close to zero play (unlike the pre-wipe meta).

Slowing down the meta

The issue is that the current metagame has a Tier 1 deck (Stonescar Burn) that steamrolls combo decks like Reanimator and Clockroaches.  In the previous meta, the most popular deck was Big Combrei, a grindy reactive deck that took a while to win games.  Big Combrei did not steamroll jank and therefore allowed janky decks to exist.

So, it seems like slowing down the meta would be the way to go.  Then the question becomes: what deserves a nerf or a buff?

Buff cards that are good ‘value’

Eternal could focus on the following values:

Optionally, Eternal could focus on other values such as creating memorable stories.  Hearthstone’s randomness encourages wacky outcomes such as a Piloted Shredder dropping a Doomsayer that clears the board.  That’s far more interesting than the randomness in Eternal, where one player gets mana flooded or screwed and does not do anything interesting.

Additionally, the developers could try to create a metagame where different playstyles are reasonably close in power level.  This would allow players who enjoy certain types of decks to play their favorite deck without getting crushed (e.g. control).  The pre-wipe meta achieved that goal quite well- aggro, midrange, control and jank (e.g. Clockroaches) were all viable.  Jank, which is by definition uncompetitive, could be powerful enough that it could occasionally “go off” and win games.

Currently, the Stonescar Burn deck is bad value.  It prevents slower control decks from being competitive.  It punishes people for playing jank.

The burn portion of the deck leads to uninteresting games and is the main offender:

In the old metagame, Stonescar was fine and didn’t cause any issues before the Stonescar burn decks were discovered.  The discovery of fire caused issues.

Of the burn spells in Stonescar Burn, I think that Obliterate should receive a nref.

One way to nerf Obliterate would be to remove the word “overwhelm”.  While the concept of having overwhelm on a spell is interesting, the word introduces complexity without adding gameplay.  Having Overwhelm on the card makes the optimal line of play more obvious- if the opponent has a 1-power toughness unit on board (e.g. Umbren Reaper), it almost never makes sense to direct this spell at the opponent’s face.  It makes the game less skill intensive.

Secondly, Cabal Countess is bad for metagame balance.  She is better against reactive control decks that rely on sweepers than she is against aggro decks.  In that sense, she is a hate card against control.  If control were more prevalent in the metagame, Shadow decks will play more Countesses to counteract them.  If hate cards against control exist, then control decks can get hated out of the metagame.  This also ties into “control’s dilemma“.  Reactive decks are already in a bad place because each proactive strategy requires the right answer cards.  As DWD introduces more cards that attack from a new angle (such as Cabal Countess), reactive decks must dedicate more card slots to dealing with every proactive aggro strategy out there.  This weakens the competitiveness of control decks.

One way to nerf Cabal Countess is to remove Ambush.  This would get rid of unnecessary complexity and likely make her unplayable in constructed.

Ultimately, there will likely be one deck that is dominant in terms of power level.  And in most likelihood, that deck would be difficult to disrupt.  If it were easy to disrupt, it would not be the best deck.

If the deck is highly synergistic, then the best deck would be combo-like and look a lot like the Party Hour deck.  Party Hour featured combos between the old Champion of Cunning and army-producers such as The Witching Hour and Scouting Party. 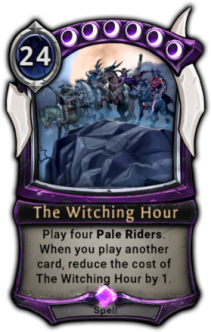 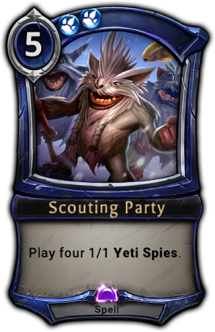 Champion + The Witching Hour was a combo that led to 30 points of flying charge damage.  This was fairly uninteractive because most decks don’t have a way of dealing with that at fast spell speed.  Because the combo was somewhat fast and difficult to disrupt, the Party Hour meta consisted of fast aggro decks and Party Hour as the degenerate combo deck.

If the metagame were balanced and multiple synergistic decks were Tier 1, then the metagame might be similar to the Modern format in Magic The Gathering.  Games would be highly matchup-dependent and come down to one set of synergies’ strength and weaknesses against another.  This is arguably unattractive since the strategic depth of the game shifts towards that of rock-paper-scissors.

If the “best” deck is not highly synergistic, then it will look like piles of goodstuff (very efficient cards that are resilient against hate).  Finkel’s 4-faction control exemplifies this the best.  While some people dislike piles of goodstuff because the decks lack character, this may be a necessary evil.  The metagame would be easier to balance, games would be more skill intensive, and winning would not be a matter of rock-papers-scissors.

In the pre-wipe metagame, Big Combrei was the most popular deck and closely resembled piles of goodstuff.  In particular, Harsh Rule was not synergistic with deck’s large numbers of units.  Despite this, the pre-wipe metagame was excellent and a lot of fun.  It’s probably the way to go.  A “piles of goodstuff” deck being the best deck is healthy for the metagame.  Then the metagame should be rounded out by a number of linear synergistic decks (e.g. aegis-abusing Rakano, Haunting Scream) at various power levels below that.  Narrow hate cards can make the metagame self-balancing by keeping linear decks in check (e.g. Steward of the Past versus Haunting Scream).

What will actually happen

Historically, DWD has a strange history of buffing and nerfing cards.  Back in the Party Hour days, many people thought that Champion of Cunning would be nerfed since CoCu (at the time) granted charge to the entire army.  This inherently creates a risk of uninteractive one-hit-kill combos.  In comparison, The Witching Hour had less risk of becoming a degenerate card.  I was surprised to find out that The Witching Hour received a nerf but Champion of Cunning did not.

The wipe changes also brought about a strange set of balance changes:

So if history is any guide… some of the upcoming changes will make sense and some of them won’t make any sense at all.