Well Snowcrust Yeti seems like a strong card.  A resilient 2/1 can do a lot of damage if played on turn 1 (maybe 6 damage for only 1 power).  This one-drop seems pushed.  The Yeti could become mediocre if the meta happens to be infested with go-wide decks… but otherwise this card looks similar in power level to Oni Ronin and Crownwatch Paladin. 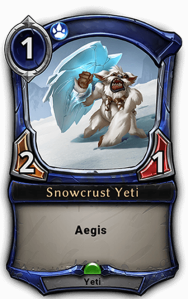 So, I’ve taken the old Tempolysian deck and updated it with this card.

Tempolysian basically plays very strong cards that Elysian has access to, e.g. Sandstorm Titan and the Elysian fatties (False Prince and Cirso).  Praxis Displacer can provide game-winning tempo against midrange and control decks; Displacer otherwise gives you value by bouncing away Permafrost, weapons, or drawing a card with Temple Scribe.  Obelisk is there to beat up on control decks and to make your units too big to be killed by relic weapons and burn.  Backlash is very strong against Harsh Rule decks and good against Burn Queen.  Because everybody is running spells nowadays, Backlash is rarely a dead card.

Jotun Hurler is a tech card for 1-toughness creatures (e.g. Burn Queen, Rally decks, False Prince) and strips aegis in a pinch.  It helps the Armory matchup because it has a body.  It may not be necessary depending on the meta.

Storm Lynx can be dropped since the Yeti can be used defensively.

With Armory running around (and less Combrei), I’ve swapped in Thunderstrike Dragon over Predatory Carnosaur.

Slow is mediocre… I’ve stopped running it.  It’s kind of like Backlash except not as good- Slow is sometimes a dead card but Backlash rarely is.  Backlash can wreck opponents in some situations where Slow can’t, e.g. the opponent draws Harsh Rule (or Crystallize) after you play Slow.