(This is a follow-up post to Eternal’s skill ceiling.)

As far as skill ceilings go, there are different aspects to it:

Games that get old

Games get old once a player doesn’t enjoy the journey of learning that comes with mastering a strategy game.  This can happen for different reasons:

A card with options like Celestial Omen (a tutor card) makes it very obvious to the player that there are different lines of play.  With Siraf, the lines are less obvious.  Players may not realize that playing Siraf with 11 power is a line of play that may be superior to playing her earlier (this matters a lot in the Combrei mirror).  Some players see fewer lines of play than more advanced players.

To some degree, this is a minor side effect of good game design.  To aid the new player experience, you don’t want them to be overwhelmed with too much complexity and too many different lines of play.  Apparent complexity is what matters to new players.  If they don’t see too much complexity, they will not be overwhelmed with the game.  Mark Rosewater has an excellent article on lenticular design, which is about having new players see less complexity while having experienced players see a lot of strategic depth.

When Eternal leaves open beta, there will likely be a lot of people making content on the game’s strategy.  This will help with the apparent depth problem, as skilled players will explain the game’s depth to newbies.  Also, having visible ladder rankings will show a player that there is more to master in regards to the game.

In an interview with Neon Blonde, Finkel stated that Eternal looked a lot like Hearthstone and therefore he thought that it wouldn’t be very good.  This is an issue that might affect Eternal’s commercial success.  The way people talk about the game and its apparent complexity will decide whether or not people even give it a shot.  And then once you start playing Eternal, you have to slog through the tutorial (which may be a turnoff to experienced CCG players because the tutorial doesn’t show a lot of apparent depth).

Some possible improvements are:

One of the issues that Eternal may face is that people will say that it is halfway between MtG and Hearthstone in terms of complexity.  While this may not always be true (e.g. Hearthstone had stuff like Grim Patron), a lot of people will simplify it down to that.  I suspect that Eternal and MtG have similar levels of depth, though I play very little Eternal draft (I don’t see a lot of depth in Eternal draft) and I’ve never played MtG constructed.

I perceive Eternal draft as overly complex while having shallow strategic depth.  I don’t think I’m bad at Eternal constructed (ended up #5 last season) so I don’t think I’m missing something about draft.  At the same time, there are players who think that Eternal draft has a lot of depth and really enjoy it a lot more than constructed.  They may perceive the skill ceiling in draft to be much higher than it actually is.  Regardless, I don’t know if it’s an issue.

I personally think that Eternal draft has some issues that aren’t fun.  There’s a lot of influence screw because the fixing isn’t as good as constructed (even if you run additional power, which is what I do).  It’s also heavily luck-based when it comes to drawing bombs and removal.  The Stranger deck will get randomly hated by opponents who just happen to draft strangers for fixing.

I also find that certain archetypes like Icebreaker and Hatchery Raider are almost always a trap, so it doesn’t make sense to go all-in on those archetypes.  Whereas with MtG, there are some sets where you can go all-in on a draft archetype like Spider Spawning, Burning Vengeance, multi-color Shrines in Eternal Masters, etc. etc.  I find that draft sets like that have more depth because it takes time for players to discover those crazy archetypes.

Some people equate complexity with strategic depth, but that’s a mistake.  To me, a great game is easy to teach but takes a lifetime to master.  Dominion and Chess are games with fairly simple rules, yet both games have incredible depth to them.  Games with complex rules (e.g. Magic the Gathering) have a higher barrier to entry, which stops a lot of people from getting into the game in the first place.  Contrast this with Hearthstone.  Hearthstone’s designers really think a lot about the “new player experience“, which makes Hearthstone a lot easier to pick up than Magic.  Eternal is somewhere in-between Hearthstone and Magic the Gathering.

Personally, I find that Eternal has some unnecessary complexity without benefiting from that complexity.  Hearthstone shows that it is possible to have complexity within its simplistic shell.  The Grim Patron deck supposedly has deep gameplay (probably deeper than Eternal though I’ve never played Grim Patron); my cursory glance at it suggests that this is true.  Although Hearthstone is moving away from one-turn-kills and completely nerfed Grim Patron, it does show what’s possible.

As far as Eternal goes, it has some unnecessary barriers for new players.  Endurance was hard for me to grok coming from MtG- it is like vigilance, but different than vigilance (you can Execute an Endurance unit after it blocks), and has this completely unrelated thing where it grants immunity to stun.  I suspect the reason why they have stun immunity in this game is to prevent a strategy from being unstoppable and allowing for a way for the metagame to balance itself.  Instead, the developers could get rid of the stun immunity and simply not have recurring stun (e.g. Eye of Winter, and to a much lesser degree Ice Sprite).  Recurring stun is inherently problematic because if it ever happens to be good, it will result in a non-interactive prison strategy (like Icaria blue and TJP control).  Non-repeatable stun seems fine.  That stun two units card (Flash Freeze) will get better with an Endurance nerf, but it won’t be a 4-of in Constructed because that card isn’t good in multiples.  Crystallize would become incredibly good without stun immunity, so it would need some type of costing adjustment. 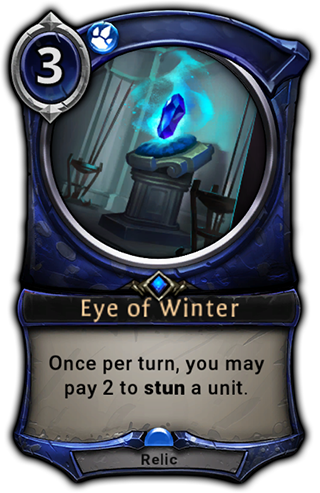 There are still a bunch of little ‘grokability’ issues that hurt the new player experience in Eternal.  This includes the unnecessary complexity in the resource base.  I would prefer a system more like Hearthstone (you get 1 power per turn) with 1 difference: the game will randomly grant you an influence that you need at the beginning of each turn.  In Hearthstone, there is no complexity surrounding the sequencing of your resource base.  That’s fine because I don’t think anybody really loves the intricacy of micromanaging their resource base.

Ideally, the way to go is to have simple cards with lots of gameplay depth.  Examples of such cards in Eternal:

Harsh Rule, while not an original design (it’s basically Wrath of God from MtG), is a great example of a simple card with deep gameplay.  Development could push these cards a little more.  Currently, the Shadowlands Guide + Ticking Grenadin combo no longer sees any play (8-silence Combrei does that).  That being said, development did a great job with the current metagame.

The current Masters rankings are a little too sensitive to short-term win/lose streaks.

It’s probably too late but the resource system in Eternal adds unnecessary randomness to the game.  It creates a lot of non-games that aren’t really all the fun.  Granted, a small portion of players do enjoy griefer strategies and seeing their opponents playing greedy resource bases get punished by influence screw.  However, I would assume that a lot of players get frustrated by non-games.  This is probably my greatest disappointment with Eternal’s game design.

Singleton formats like EDH (the casual MtG format) highlight good randomness.  It creates very unique games since you aren’t always repeatedly drawing the same cards and playing the same combos.  Eternal moves slightly in that direction with the 75-card deck size rather than 60.

Hearthstone has simplified deckbuilding with its 30-card deck.  That might actually be better from a new player perspective than Eternal’s 75 card deck.  I don’t know if putting together an Eternal deck is daunting for new players.

What I would do if I were Direwolf Digital

I wouldn’t devote much resources into raising Eternal’s skill ceiling, which likely only affects a fraction of one percent of Eternal players.  Because the beta population consists of a lot of CCG vets, it is likely that a smaller percentage of the population will hit the skill ceiling once the game leaves beta.

I would focus a lot more on the new player experience.  There are a lot more casual gamers than hardcore gamers who like massively complex games.  To help casual players, there are little interface issues to work on- the stun duration and animation is not intuitive.  The tutorial should be skippable.  There’s a bunch of stuff like that.

While it would suck, I would seriously consider changing the resource base to get rid of power screw and flood.  Yes it will take a lot of development effort to re-balance everything and to increase the influence requirements on a lot of cards.  But I honestly feel like power screw, power flood, and influence screw are bad game design.  There are MtG variants like Stack that don’t have that issue.  I’ve played it and it’s a lot of fun.  It can be done.

For the draft format, I would specifically make drafting about draft.  It doesn’t need to be like Hearthstone Arena where there are ten million cards in the draft pool.  It’s fine to curate the card pool for a better player experience, and to do things like having build-around-me cards appear very early on in the draft.  Designing specifically for draft would lower apparent complexity and add a lot of depth to gameplay.  Phantom drafts in MTGO for unpowered and powered cube is an example of an environment designed specifically for draft, without weird game economics getting in the way (you cannot keep the cards so there’s no point in rare-drafting).

Lastly, I would focus on Eternal’s greatest strength: the archetypes are fun.  The Clockroaches archetype is an amazing design.  The game has some really sweet synergies and combos.  I would keep doing more of that.